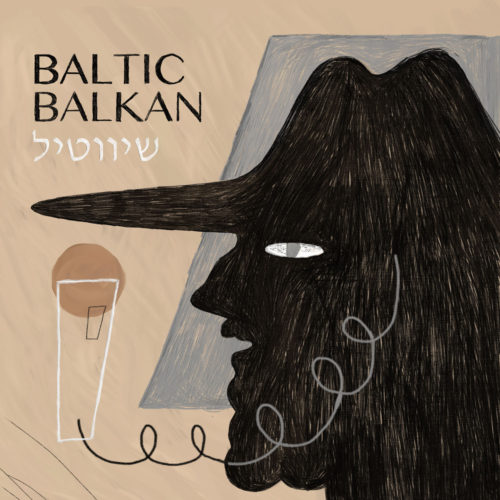 “We had created modern, interpretations of Jewish songs, which were sung in different periods of time in Lithuania,” – Baltic Balkan relates. “We are very glad about international cooperation with DJ Click and MC Kasper from France. Visualisations of the album were created by talented artists Asta Ostrovskaya and Lina Vysniauskaite.”

A bit minor piece about a dance, called Kadril, is a mix of Jewish song and French rap. Monkey Theorem band member MC Kasper, coming from Grenoble, spiced Jewish song with an exceptional and contemporary French poetry. Kadril also includes a fragment of Lithuanian Jewish woman voice – archive sound record made in the beginning of the XXth century. You can also find Kadril version remixed by Belgian duo Lazarus Soundsystem.

For the first time in Baltic Balkan history, video was made for Kadril. From the first sight, the story directed by Asta Ostrovskaya and shot by Robert Muravskij, might seem abstract, mystical, surrealistic and even comical, but there are more layers hidden. Obliteration of identity and culture, temporary nature and extinction in modern world are discussed. “What was real and true yesterday, what was improtant and justified, might lose sight today. Screwed by routine, we forget that we might lose everything, we have today, and all of this is very fragile. Because this song is Jewish, the whole idea makes even deeper sense”, – Baltic Balkan says.

The plot of the video is happening in a flat full of already historical details, reflecting different eras and trends. Decks of cards, plastic flowers, crystal glasses,woven carpets, antique photos on the walls are only few minutiaes, which turn into ashes in three minutes. Picture of Pychka, unforgettable talisman of Baltic Balkan, escorting whenever wherever they go, also got an important role in the video.

Žydų fokstrotas (Jewish Foxtrot in Lithuanian) is a joint version by Lithuanian composer Marius Salynas and Baltic Balkan. The original was created by Moishe Hofmekler of a Jewish origin, who lived in Lithuania in interwar period. His orchestra was one of the most professional and reputable in these days’ Kaunas. M. Hofmekler spoke Lithuanian and encouraged Lithuanian composers to create their own music. He collaborated with Daniel Brojdes-Dolskiy and others.