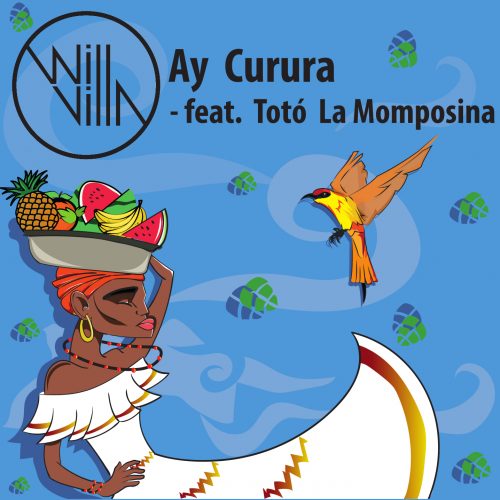 Colombian DJ, producer, and sound engineer Will Villa has released the single and music video for “Ay Curura”, his remake of the classic Colombian folk song “Curura” composed by Toño Fernandez. The single, to be featured on his upcoming debut EP, includes the legendary, Latin Grammy-lifetime achievement recipient Totó la Momposina on vocals plus her backing band. The song was originally recorded in 1993 by Totó la Momposina and was featured on her 1993 breakthrough album La Candela Viva, which was released on Peter Gabriel’s Real World Records label.

“[Ay Curura] has been covered, remixed, and sampled by many people already. I just wanted to go a step further and pay tribute to the woman who created it in the first place,” notes Will. “To me, it’s a dream come true.”

The Medellin, Colombian-born and German-based Will Villa combines Latin American and other native rhythms from throughout the world, such as reggaetón, champeta, kuduro, cumbia, and afrobeats, with urban and electronic beats, creating a modern, aural journey through different parts of the globe. The DJ, producer, and sound engineer doesn’t just sample other beats and music – he also records real instruments and voices of professional musicians.

Will began to DJ at the age of 15 in his living room and at the age of 18 he started performing at nightclubs in Colombia. A new chapter in his career began when he started to promote Latin American bands in Germany and bring them on tours throughout Europe. This led to the birth of his record label Nutibara World Music, which opened the door to a strong relationship with Conga Management and their artist roster, including Tego Calderón, Calle 13 and Totó la Momposina, one of the most beloved performers of Latin America. Will is currently working on his debut EP as an electronic dance music producer.

More info about Will Villa