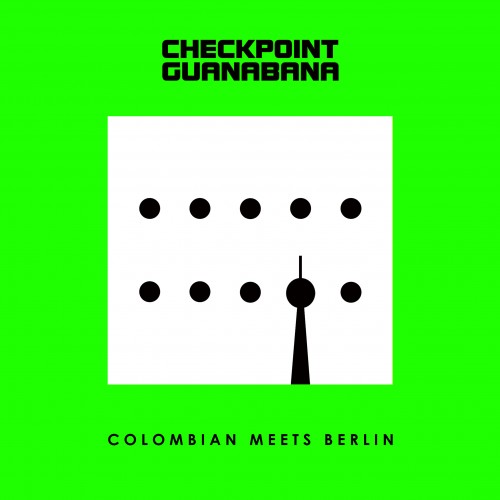 “Colombia meets Berlin is the sound experience of coming from Latinoamerica to Germany a while ago, finding this awesome Berlin, that we all had heard wonderful things about.
To its fresh electronic sounds, multicultural projects, interesting music fusions, and its undeniable punk style feeling which can be perceived in its wide streets, we added music from our countries, specially from Colombia, which is an important meeting point of various Latin-American rhythms.
The result of mixing Berlin features with these rhythms is a Funky album, speaking a bit about everything inspired by Latin-American culture, electronic music, rock music and rap music. And indeed inspired by this wicked city… Berlin”.

CHECKPOINT GUANABANA is the music project founded by Alejo Marulanda & Hermano Simón, two Colombian-Berliners that together with some of the most representative musicians of Berlin´s Latin-scene are putting their twist on the sounds of Tropical & Electronic Music LIVE, creating AFRO-LATIN rhythms like merengue, cumbia, salsa, merecumbé or timba (amongst others) combined with POWER-FUNK, ROCK, HIP HOP and one of their most important influences: The ELECTRONICA from Berlin, their headquarter.

The result: ’Afro Tech Funk’ LIVE. It´s an organic interpretation with the spirit and influence of the electronic music, it´s the live & funk experience of electropical.

The « Guanábana » is a delicious fruit, it´s not well known in Europe yet but very famous in Latinamerica for being so tasty and for its healing potential. As well as its culinary delights, the music of Colombia and Latinamerica satisfies a wide range of musical taste buds. Latinamerica’s Indian and African heritage has produced a powerful musical recipe, which is enjoyed by listeners worldwide.

Checkpoint Guanabana have brought this recipe to Germany where Colombia’s and Latinamerica´s rich music has been mixed with the music Berlin is famous for cooking up: The Electronica. The finishing touches are added in Bogotá by the Colombian-Berliner producer Pol Moreno. The band have already entertained the crowds of major festivals and venues such as Global CPH (DK), Festival Mundial (NL), Yaam Berlin (DE), Afrolatino Festival (BE) or Germany´s Carnevals of the Cultures (Berlin & Bielefeld as closing act) amongst others.

Berlin-made music with colombian hands, this is one checkpoint you will love to cross.
Greetings from Berlin. With funky love,